HM Fort Roughs was one of several World War II installations that were designed by Guy Maunsell and known collectively as His Majesty’s Forts or as Maunsell Sea Forts; its purpose was to guard the port of Harwich, Essex, and more broadly, the Thames estuary. This 4,500 ton artificial naval installation is similar in some respects to “fixed” offshore oil platforms. It is situated on Rough Sands, a sandbar located approximately 11 kilometres (6 nmi) from the coast of Suffolk and 13 kilometres (7 nmi) from the coast of Essex. Today it is the location and de facto capital of the self-proclaimed and unrecognised state, the Principality of Sealand.

On the afternoon of 23 June 2006, the top platform of the Roughs Tower caught fire due to an electrical fault. A Royal Air Force rescue helicopter transferred one person to Ipswich hospital, directly from the tower. The Harwich lifeboat stood by the Roughs Tower until a local fire tug extinguished the fire. All damage was repaired by November 2006.

Leaving Portus Itius in France, from a lagoon which stretched to St Omer behind a fringe of islands including Calais and Boulogne, the Roman fleet was swept northwards by the tide and prevailing winds.
When the tide turned, they rowed towards Pegwell Bay and Ebbsfleet. They built their Triumphal Arch next to Thanet, now silted up, but a true island even in Medieval times.

Past, Present and Future are woven tightly together, yet I effortlessly slip between the warp and weft of this strange fabric.

A Roman Triumphal Arch—faced in Michelangelo’s favourite white marble from Carrara—shone so brightly as to be seen from France.
The ominous Cooling Towers of Richborough Power Station were an aide to all shipping around Böcklin’s Isle of the Dead, where thousands of blackened, Bronze Age bones are buried ankle-deep upon the white, chalk cliffs.

The ships wait for the turn of the tide to bear them straight to the new mega-port of London Gateway. After unloading, they will gorge themselves upon thousands of tonnes of refuse, then build our hell in another people’s paradise. 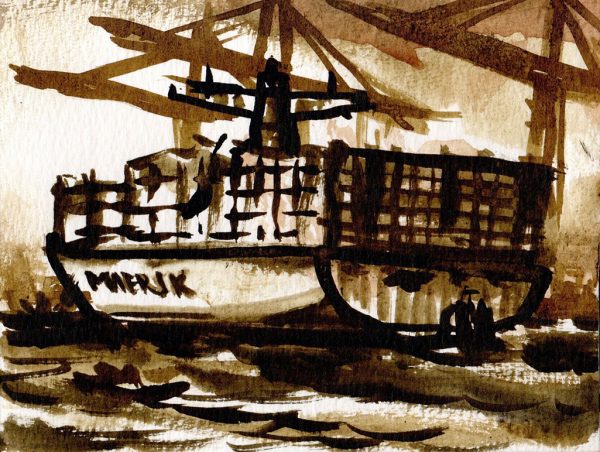 Mammon sits enthroned once more in London’s new Heart of Darkness. A palace bedecked with gigantic cranes transported ready-made across the ocean all the way from The East.

Knock John fort is situated approximately 16.1 kilometres (9 nmi) from the coast off Essex and was grounded on 1 August 1942. It was decommissioned on 14 June 1945 and evacuated on 25 June 1945. The platform was maintained until May 1956 when it was abandoned. In 2009, it was observed that there was a slight distortion of the legs when viewing the tower from west to east. It is thought that underscouring is the cause of this.

Abandoned as a flood-defence after the D-Day landings a dozen, half-sunken, ferro-cement lighters flounder in the marshes beside the Tilda-Rice factory of Rainham. A wire ‘Diver’ sculpture by Kaufman emerges from the depths.

Rotting pirate corpses in creaking cages, swung in the crosswinds of Bugsby’s Reach, where the tide now runs in and out of Richard Wilson’s ’Slice of Reality’. His sawn-in-half ship gapes, dissected on the shore.

Anthony Gormley’s sculptures, forlorn and alone, stand firm on their posts in the rising and falling tide of Limehouse Reach.

Attracting the uninitiated into the cult’s sinister, smoky, high-tech cave, London’s Roman Temple of Mithras was where Sacred Bulls were ritually sacrificed. It was first removed, then reconstructed beneath the new Bloomberg building, which squats over the Sacred River Walbrook ‘doing its buisness’. Christina Inglesias’ ‘Forgotten Streams’ are fabulously foul, artistically odourless cesspools of humanity. These twin fountains of tarnished bronze, punch me cleverly below the belt.